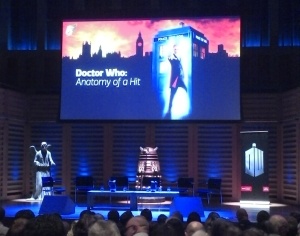 I have a very special guest for you this week. This is rather exciting. This blog post has largely been written by Stephen ‘what the hell are you doing to my favourite characters’ Moffat. Oh yes.

Sadly, Mr. Moffat is not actually writing for my blog. But I did go to a lecture / Q&A session with him and his team on Tuesday night, hosted by the Royal Television Society. The subject was how Doctor Who is written and produced, and I took notes. I’m a researcher by day and a writer by night. Of course I took notes.

So here, for your delectation and delight, are words of wisdom from the writing and production team of the world’s longest running sci-fi series.

“On paper – in the script – the Doctor is always the same. Remarkably the same. It’s the actor’s performance that pushes it in seemingly different directions.”

“There’s long scenes in Doctor Who because frankly the budget runs out and everyone has to get involved in some urgent standing around.”

“The Doctor’s always surprised he has to say the nice things. He says the nasty things but he rarely thinks to say the nice ones. He takes so much understanding for granted – he assumes the people he loves know how much he loves them.”

“Big secrets that the dialogue gives away whilst filming on location are whispered or mimed. The line is then recorded and added later.”

“…And the Master will be a woman. So what? What does that mean? You cast a person, not a gender. Otherwise it’s just a gimmick, and I swore never to do those.”

“If you fight the Weeping Angels and the Silence, what would your nightmares be like?”

That last one is a really interesting point. Given what your characters get up to in their waking hours, what would their nightmares be like? How would that affect them? Also, what does your character take for granted? What don’t they think to say?

Note the creepy positioning of the Weeping Angel

“You cling onto the maddest, boldest part of a story and you make it work, no matter the restrictions. Because that’s what excited you about the story in the first place.”

“Always try to think how you grab people in the first few minutes. Otherwise they’ll go off and make a cup of tea.”

“If you tell the truth all the time there’s no variety. Keep secrets. Keep surprises up your sleeve.”

“People don’t want stories that are safe or reassuring. They want exciting and dangerous stories that can take them to new places.”

everwalker fails to be stealthy whilst attempting to hijack the TARDIS

“You don’t know what other people want. Trying to imagine you’re clever enough to guess, when you can’t even think what to get the sods for their birthday, is impossible. Write what you want. You can only ever write the joke that makes you laugh.”

Now, I know that none of those particular pieces of advice are stunningly original. That’s sort of the point, actually. This man – whether you agree with his creative choices or not – has been hugely successful in his involvement with both Doctor Who and Sherlock. A huge number of people clearly like his storytelling (including me). If these are his top tips for writing successful stories, then it suggests he doesn’t have some kind of secret technique or gold-plated muse locked up in his cupboard. He knows the same pieces of advice as everybody else, and makes the most of them. And it’s a lot of most. Watching him talk about Doctor Who, it’s obvious that no one is a bigger fan of the show or the character than he is. He loves the stories he tells, and that passion draws in the rest of us.

So go write your stories, and love them. Love every mad, bold, exciting, dangerous part of them. And maybe, one day, millions of other people will love them too.