There have been multiple lists of ‘Pixar’s rules’ doing the rounds on reddit over the years, not least because Pixar has a reputation for telling a good story. When I was catching up with the backlog of Writing Excuses podcasts during my commute last week, they dissected a list and one rule in particular struck me as important but under-discussed.

The Try-Fail Cycle for character development is something that often happens fairly organically, or as part of the 5-Act Structure. The hero attempts to do something, fails, and tries again later with climactic success (unless it’s a tragedy). It’s an almost instinctive part of the plot peak-trough pattern. What’s not often explored is WHY it’s important.

Um… I’m referring here to a generic superman, not the caped superhero (although he’s also often quite dull). The point is that a hero who automatically succeeds at everything is uninteresting for the reader. They can’t relate to them, or root for them during a character growth arc. There is, in fact, no room for growth which means character development is a challenge. And without character development, where’s half the story? If the assumption of success is there, you also lose the tension of conflict and, indeed, a significant proportion of the actual conflict.

Failure provides an opportunity for conflict and character development.

Why do we fall? 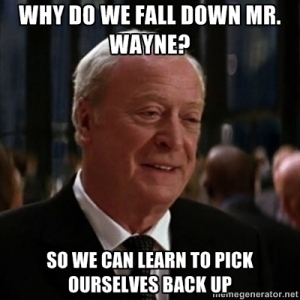 Everybody fails (apart from Superman). Not everybody picks themselves up and tries again. That determination to succeed, that perseverance in the face of all odds is a heroic trait and one that endears the character to the audience. A reader can empathise and cheer for someone who keeps try, try, trying again. It shows a strength and greatness of… well, character.

If you’ve already failed once, how do you know you’ll succeed next time? The previous failure raises the tension for the next attempt, which is what keeps the reader on the edge of their seat. Regardless of narrative convention, there’s no guarantee that this second attempt will be successful. The audience has seen how badly it could go – will it go that way again? But if the character hasn’t had that previous failure, your reader is slumped back in their chair with a shrug because they know the character will win. They’ve seen it before.

So there you have it. Three important reasons why beating your character round the head with a stick early on is important. Well done, Pixar. I’m not saying it’s essential – you can’t write by rote, after all – but it’s definitely a factor to keep in mind.